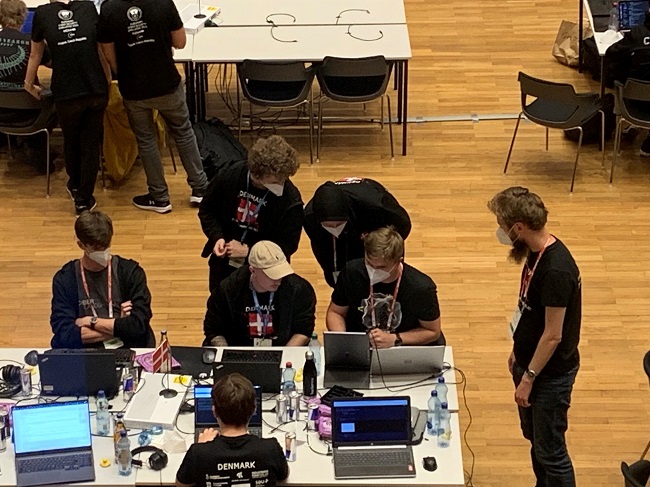 Best ranking for Denmark in the European Cyber Security Challenge 2021

By Michael Christensen and Rasmus Broholm

On Saturday 2nd of October, the Danish cybersecurity team arrived back from Prague to celebrate their 5th place in the European Cybersecurity Challenge. On the day of the return of the national team, they joined the reunion of The Danish Cyber Championships, hosted by IDA, where they were greeted with applauses, confetti and positive energy.

It all started with the Danish Cyber Championships, consisting of qualification for the regional competition to be competing in the national championship. The best contestants moved on to the boot camp where five juniors and seniors were picked for the national team. This team trained throughout the summer, leading up to Monday morning the 27th of September. The team met with Trine Bramsen, the Danish Minister of Defense for a breakfast meeting in the Ministry of Defense. The minister wished to team good luck for the European cyber championships.

The national team travelled to Prague the next day, on Tuesday, in preparation for the physical competition. The competition was ongoing from Wednesday to Thursday, where apart from doing hacking challenges, the contestants also participated in an Escape Room. The Danish team completed the very first challenge, started the competition out being in the lead, and ranked high throughout the entire competition.

On Friday the 1st the final scoreboard and placement of the teams was revealed, with Denmark being 5th. This is the first time that Denmark have been in the top five, during the European Cyber Security Challenge. This is considering the size of Denmark, comparing to the top four countries being Germany, Poland, Italy and France, ranking 1-4 respectively. Both the national team coach, Jens Myrup Pedersen and the team captain for the Danish team are very proud, with the Danish captain, Tobias Kay Dalå stating:

“I am very satisfied with the result and the experience was fantastic! The team collaboration has been great and everyone on the team have made a massive effort to make this possible.”

Jens Myrup Pedersen, who is also professor at Aalborg University, and coordinating the M.Sc. in Cyber Security adds: “The threat against Denmark is very high, both when it comes to cybercrime and cyber espionage, and we see that the number of cyber-attacks continue to increase. I hope that the championships will help to attract more young people into the field, and that the community we are building around it will make many of them stay and pursue an education and career in cyber security”.

Everyone at the reunion and around in the cybersecurity community have shown huge support and are impressed with the position the Danish team have achieved at the 2021 European Cyber Security Challenge.