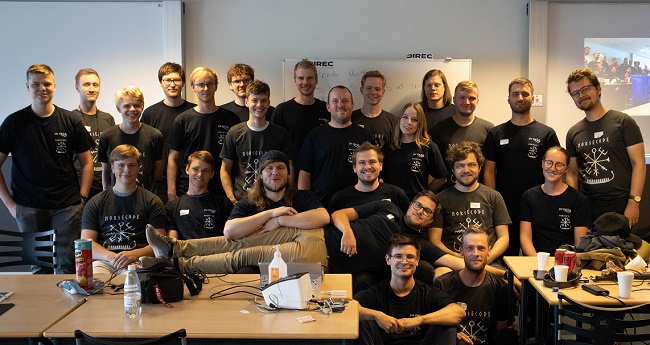 The hacking Olympics at Aalborg University 2021

By Michael Christensen and Rasmus Broholm

The Scandinavian team Norsecode participated in the DefCon hacker competition from a venue at Aalborg University, Copenhagen from 6th through 8th of August 2021, which allowed the participants, to both compete and sleep at the campus.

The hacker convention had over 30.000 attendees this year, joining virtually from all over the world.

“Our goal is to promote and create a community among the youths in Denmark with an interest in Cybersecurity” states Jens Myrup Pedersen, professor in Cybersecurity at Aalborg University.

DefCon is usually hosted in Las Vegas, USA, but due to travel restrictions caused by Covid-19, it was not possible for the participants of Norsecode to travel to the United States. Norsecode is a collection of white hat hacking teams from Norway, Sweden and Denmark, including students and full-time cybersecurity professionals. DefCon is the largest cybersecurity conference in the world and hosts, what is considered the unofficial world championships in hacking. The teams are representing countries such as China, Israel, Italy and South Korea, along with many more.

As cybersecurity is a global concern and countless attacks are making worldwide headlines across all media, competitions like these, unites and educate people interested in cybersecurity across the globe, about the latest techniques and trends. The DefCon championship consists of 16 different teams, such as Katzebin, Plaid Parliament of Pwning and Norsecode, all competing against each other to beat the other teams in different aspects of cybersecurity.

“Through our engagement in CyberSkills we are trying to motivate and inspire the younger generation to become cybersecurity experts. Some will hopefully choose to go to the university and are now able to start their pursuit for a career in cybersecurity, by joining our new bachelor degree Cyber and Computer Technology and later the Master’s degree in Cybersecurity” states Lene Tolstrup Sørensen, Associate Professor, Engineer.